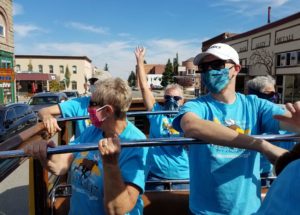 One of the best Annual Fun Run for Charities occurred during a year of great uncertainty and change. The Fun Run capped off in an incredible way, when 59 charities were awarded $241,787 from the 2020 virtual Fun Run on Oct. 22. With that, the Fun Run has raised $3.2 million for community efforts during the past 17 years.

“For the first time, the Annual Fun Run for Charities was held virtually,” said Stephen Kalb-Koenigsfeld, Fun Run Race Director. “Like so many other races and events in the health climate of 2020, the event prevailed!”

Charities raised $3,000 less than last year, a testament to the commitment of people to the good works of these charities for community.

On the virtual side of event organization and operations, the Community Foundation hired Kristen Hollum, with Red Lodge Events. Kristen’s knowledge of organizing events and her experience in the virtual race world helped the Fun Run to succeed virtually. More than nearly 500 people participated in the virtual event.

“The Foundation wasn’t questioning whether or not we were going to have the Fun Run, only how,” Timmons said. “We know all 59 charities have a line item in their budgets titled ‘Fun Run,’ and we know there is no other way to raise these funds except to have the Fun Run event.”

The budgets represent essential services to people and places across Carbon County. Timmons went on to say, “The Foundation reached out to Fun Run sponsors and match donors encouraging them to continue to donate to the event. If they could not financially support it this year, could we still use their logo for unified support that the event must go on. They all united together!”

Participants from Wisconsin, Connecticut, California, Texas, and Minnesota had first-time runners in the Fun Run this year. Bobbie Wynne, a Connecticut resident, was able to participate in the Fun Run for the first time this year with her adopted dog, Leo. The two moved east shortly after Wynne adopted Leo from Beartooth Humane Alliance.

“Leo has taught me that every day is the best day ever,” Wynne said. “Even though we needed to move our hearts are still in Red Lodge. We were able to be part of something that means so much to both of us. If not for [Beartooth Humane Alliance], Leo and I never would have found each other and I cannot imagine my life without him!”